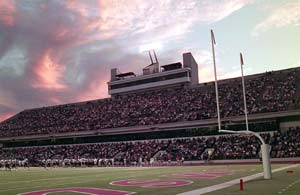 Currently seating 17,337 fans, Plaster Stadium has seen a lot of changes since the first football games was played at the stadium on September 19, 1941, against Durant College out of Oklahoma.

Springfield's first all-weather track was installed in the stadium in 1987 and in 2000 the Omniturf artificial turf was replaced with the revolutionary Field Turf Synthetic Grass. In 1991, expansion and renovation of the sports complex included expanded seating, skyboxes, additional media accommodations, 12 handball/racquetball courts, and a new university Athletics Strength and Conditioning Center.

In 2014, the stadium was converted to a football-specific field surface and other renovations were made for a more intimate fan experience. The playing surface was replaced and moved closer to the west grand stand. In addition, the student side (east side) was fully replaced from the ground up and includes game day locker rooms, a new scoreboard and a party platform called "The Clif".

Home to the Missouri State University Bears, the stadium is a popular hangout for Bears Fans during the football season.

- "The Clif", a party platform atop the east grand stand

- Grass berm at the north end of the field